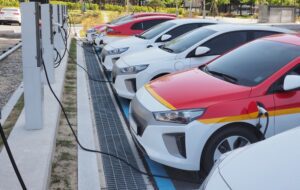 are far from a foreign or new concept. The first mainstream hybrid, the Toyota Prius, was released in Japan in 1997. Less than ten years later, Elon Musk started Tesla Motors in Silicon Valley. Even before both Tesla and Toyota, electric vehicles were the norm before the Model T took the world by storm in 1908. The world is well-exposed to the history of the electric car.

And yet, the world remains unprepared for its presence.

Because of the way electric cars are designed, they require less moving parts than their gas-powered relatives. This will cost jobs not only for those who build and manufacture parts but also for those that fix and replace them after the car has left the assembly line. Of course, jobs will also be created to make new parts, but the give-take of the situation is less than ideal.

There’s also likely to be a major paradigm shift. Currently, Saudi Arabia makes billions each year by virtue of being the oil capital of the world. As electric cars take a larger chunk of the market, the new hot spot could become Chile. Chile is home to the largest lithium deposits on the planet, and that element is the main component of electric car batteries.

But steps are being made to prepare for the oncoming vehicular change. Norway, in particular, is ahead of the game–over half of the new cars sold in 2017 were electric. Sales are so high due to incentives like free parking and driving in the bus lane. The vehicles aren’t even taxed, bringing costs down even more. They hope to have sales for electric cars at 100% by 2025…only seven years away.

China is also big on electric vehicles, thanks to its “war on pollution.” As the most populated country on Earth, China is also one of the most polluted and overloaded by traffic. By 2025, 20% of all cars sold in the entire country must be electric. Not a huge hurdle to overcome, as they already lead the world in electric car sales. Last year, 600,000 electric vehicles were bought in China, a 71% increase over 2016. These numbers continue to grow each month.

As for vehicles other than cars, preparations are being made to convert other modes of transport as well. Zunum Aero hopes to have an electric plane available by 2022. The start-up is partially backed by Boeing, and ties in well with Norway’s plans to make all short-haul flights (1.5 hours or less) use electric planes exclusively by 2025. Hybrid and electric versions of passenger and cargo ships are also being developed by various companies worldwide.

These changes, however, are absolutely necessary. The UK and France want all new cars to produce zero emissions and be completely electric by the year 2040. As for the oil industry, BP issued a report suggesting it could peak sometime in the 2030s thanks to demand for electric vehicles. Both of these events will have major effects on multiple industries, not just transportation vehicles.

Maybe saying the world isn’t prepared for electric cars is a bit overdramatic. Many countries are well into the process of adapting and welcoming these new, alternative options for travel. But the electric car market is only expected to grow more as the years go by, and the industry remains set in the gasoline-powered ways. Perhaps it is simply better to say that some countries, including the United States, are trailing in making a world friendly to hybrid and electric vehicles. There’s still time to change the rules and pave new roads, though, before electric cars force us to do it too late.

The Running of the Bulls

Tamara Krinsky: A Day in the Life