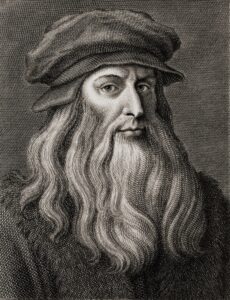 Centuries after its completion, Leonardo da Vinci’s Mona Lisa remains one of the most discussed paintings ever. Debates on who the model was and what she is smiling so cryptically about continue among scholars, experts, and the general public alike. But it’s not just his artwork da Vinci left behind. He was also one of the greatest inventors in human history.

Born in what is modern-day Italy, da Vinci received very little education before becoming an apprentice to Andrea di Cione. After his apprenticeship ended, he traveled across Europe before settling in Milan. It was during this time that many of his scientific notes and journals were penned. While da Vinci left Milan several times over the course of his life, he almost always returned to the city. He eventually died on May 2nd, 1519, at the age of 67 in Amboise, France.

Before his passing, however, he wrote 13,000 pages of notes on science, anatomy, engineering, and art. Among these musings was a sketch for an aerial screw. In his notes accompanying the drawing, da Vinci wrote “if this instrument made with a screw be well made- that is to say, made of linen of which the pores are stopped up with starch and be turned quickly, the said screw will make its spiral in the air and it will rise high.” While he never tested this device, it did aid in the invention of modern helicopters. 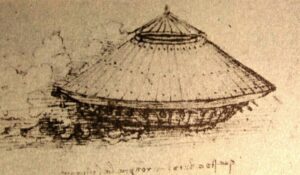 Another vehicle da Vinci proposed was an armored car- a precursor to tanks. Instead of treads and a mounted cannon, however, this car had wheels and light cannons arranged in a circle. The car would’ve had a 360-degree range and was designed to intimidate and scatter the enemy. There was one major flaw, though: because the powering cranks went in opposite directions, forward movement would’ve been impossible. It’s been theorized that da Vinci included this error on purpose, as he was well-known for his pacifism.

Perhaps his most iconic invention was the ornithopter. This flying machine would’ve been able to carry a human in a paragliding-esque fashion. The wings (which reached an impressive 33 feet) were heavily modeled after bats, featuring the same pointed ends that are associated with the creature. The wings would also flap to maintain flight, powered by the pedaling pilot. Ultimately, though, the device was never airborne. No human could generate enough energy to lift the device off the ground.

Da Vinci also designed a mask with two tubes attached. These tubes would float above the water and provide airflow to the wearer below the surface. Sound familiar? It’s a rudimentary version of scuba diving gear. The mask also featured a balloon operated by valve to allow the diver to sink or rise more easily. It also had, most strangely of all, an attached pouch in case the swimmer ever needed to relieve themselves. Given da Vinci’s time living in Venice, a city full of waterways, it’s only natural he’d want there to be an easier way to explore the world beneath the waves. 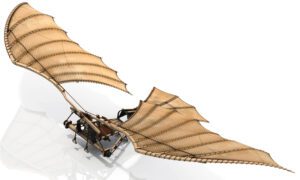 Of course, this is just a small sampling of the many inventions da Vinci dreamed up during his lifetime. He also imagined a giant crossbow, an anemometer (a device for measuring wind speed), and even a type of parachute. He wrote down notes for a more accurate clock. He designed the layout for an “ideal city,” complete with a sewage system and fresh air vents in buildings. And this is without even accounting his contributions to human health and the art world. Leonardo da Vinci may have been unable to see much of his work come to life in the 15th century, but in the 21st, his inventions are finally able to take flight.