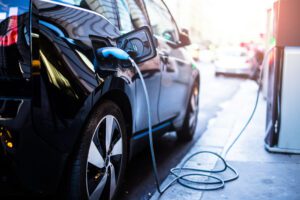 While hybrids are a decently common sight, fully electric cars are less so. Part of it has to do with the price tag (even the cheapest models are close to $25,000). But a larger part is the manufacturing of the cars themselves. In March, BMW announced they wouldn’t be mass-producing electric cars until 2020. Their reasoning is that it’s not profitable enough with current technology, but by 2020 it will be much easier.

So, what goes into making an electric car that makes it so costly? The first is the battery. Finding a battery reliable and small enough to fit in a car is no easy feat and was nearly impossible until recently. Having the battery be rechargeable was also a necessity that has only been addressed in current times. Even with these advancements, the battery and the electric propulsion system add up to about 40% of the car’s weight. Compared to the 25% taken by an internal-combustion car’s power devices, the difference is steep.

This added weight dictates the frame must be strong but lightweight. Traditionally, aluminum is used, with other parts of the car being made of magnesium or a shatterproof plastic. The other materials used in building, however, are much more mundane. Vinyl and leather are used for the interior, the windshield is made of glass, etc. The tires are rubber but are specially designed to conserve energy.

Unlike gas-powered cars, electric cars are both welded and glued together. 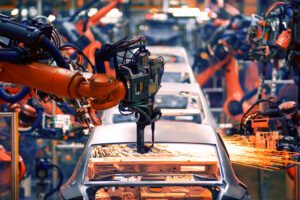 Don’t worry, it’s not your traditional white glue; it’s a powerful adhesive that is durable and stiffer than welding. The undercarriage is built first, with the upper body being assembled out of smaller parts. After both upper and lower bodies are attached, the roof is bonded to complete the frame of the vehicle. It’s worth noting that all the parts have been painted before construction began.

Once the body of the car has been built, it’s off to general assembly. Electronics are put in place, like the propulsion system and a small radiator. The control console is installed as well. Next is the interior: the seating, lights, flooring, etc. The cover for the console is added, which was premade and molded specifically for the make and model of the car. Climate control comes third, with the air conditioning and heating systems installed. The circulation system is inserted during this step too.

The battery, unlike the interior, takes a bit more effort. A special device is used to lift the battery into the vehicle, where it is then attached to the chassis. The axles and wheel are added, and the car can now drive. Before moving to the next station, the car is booted up and tested briefly. Once the system clears it, it’s time for the windshield, doors, and a final quality control check.

It seems fairly straightforward, but there are some unique steps to the electric car manufacturing process. For instance, traditional gas-powered cars aren’t tested until construction is complete and the vehicle is no longer on the production line. This is due to the pollutants let out by the exhaust system. An electric car has no exhaust, so it can be tested inside the facility before it’s even fully constructed. It’s a good indicator to the craftsmanship that it can drive prior to completion. 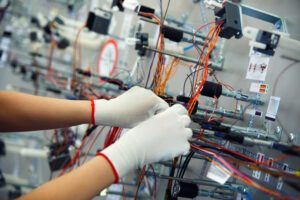 That craftsmanship is why electric cars are so expensive, and why it costs companies so much to produce them. While they ultimately save the consumer money on gas, the initial price tag is a big hurdle to cross for manufacturers. Helping the environment and providing to customers is important, but so is turning a profit. But as technology in the manufacturing process advances, the cost will drop. It may be a few years, but don’t be surprised to see a whole parking lot of electric cars in the near future.

10 Foods To Eat To Live Longer

Sodium Batteries Could Be The Future of Electric Cars

Ever since Sony commercialized the first lithium battery in 1991, companies haven’t looked back at many other battery options. However, in the summer of 2021,

Why is an Artist’s Signature Important?

Famous artists throughout history such as Van Gogh, Monet, Picasso, Leonardo da Vinci, Frida Kalo, and many more have added signatures to their art. Many

Tune In this Weekend for The Science Behind Supplements

What is Regenerative Agriculture?

Regenerative agriculture is a nature-friendly conservation and rehabilitation approach to food and farming systems. It is not a specific practice, but instead a combination of

10 Foods To Eat To Live Longer

There have been countless attempts and studies to solve the age-old question—how can we live longer? Many of the more recent studies have found that