Geysers: A Rare and Unique Phenomenon

You’re walking along a path through the woods when you happen upon a small mass of land protruding out of the ground. You think very little of it until, suddenly, the ground begins to hum beneath your feet. You see steam peaking out from the hill as you approach. The steam grows thick and rises higher and higher in urgent swirls. Suddenly, without warning, water bursts out and flies into the air. Fifty feet…no, one hundred…no, two hundred feet into the air the water flies up and spreads out over the sky. This may sound like the beginning of a doomsday movie, but it’s actually a naturally occurring phenomenon known as a Geyser. 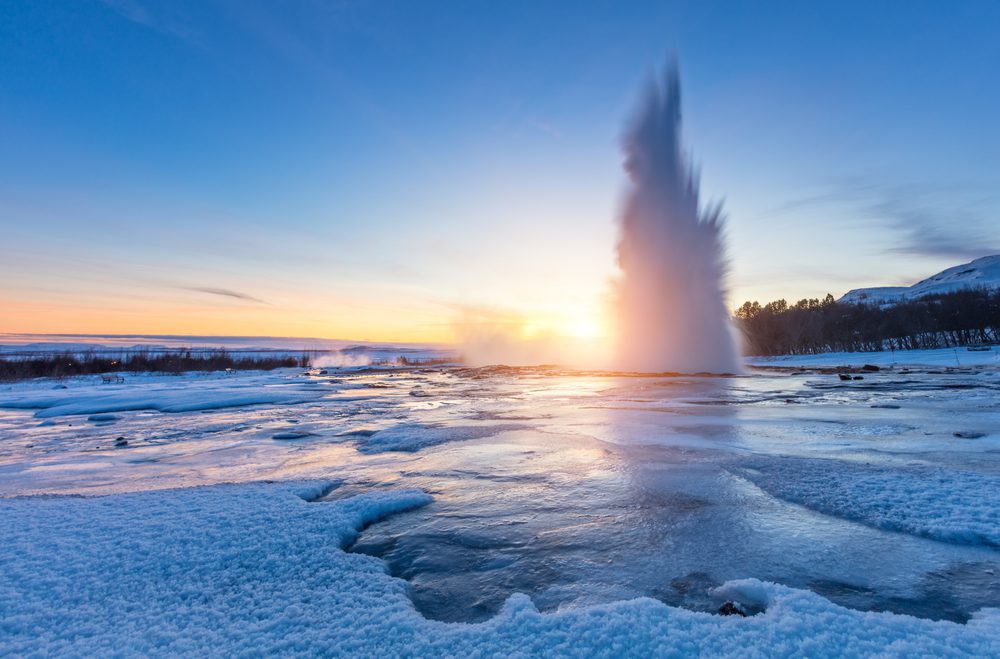 The word Geyser is derived from Geysir, a name given by Icelanders in the seventeenth century to an intermittently discharging hot spring in southwest Iceland. Most of us can picture the sight of steam rising up in a violent fashion, but what actually is a Geyser? These natural wonders result from the heating of groundwater by shallow bodies of magma, so they generally occur in areas that have seen some volcanic activity in the past. They’re extremely rare because they require four very specific components to form- hot rocks below the ground, a source of groundwater, a subsurface water reservoir, and fissures to deliver the water to the surface. When water boils beneath the surface, gas or steam bubbles form which causes the water to shoot through the vent of the Geyser. It’s kind of like when steam rises as you boil some tea on the stove.

Because they require such specific conditions to occur, there are only around 1,000 Geysers worldwide and 300 of those are located in Yellowstone. The remaining Geysers mainly occur in Russia, Chile, New Zealand, and Iceland. You may be surprised to learn though that Geysers typically erupt irregularly and infrequently. There are only a few that erupt often, one is “Old Faithful” at Yellowstone, which was given its name for just that reason. This Geyser will typically erupt every 60-90 minutes, but its eruptions have begun to slow over time.

Speaking of Yellowstone, this is the home of the world’s largest Geyser, Steamboat Geyser. Some of its eruptions have gone up to 400 feet into the air. It likely won’t be the main attraction of a visit to this park, however, because it erupts very rarely- only around a dozen times within the past twenty years. Waimangu Geyser in New Zealand used to be the tallest in the world, blasting water roughly 1600 feet into the air. It was, however, hit by a landslide which altered the hydrology so it hasn’t erupted since 1902.

According to the USGS, because the process of Geyser eruptions is similar to that of volcanic ones, by studying geysers we may better learn how to predict when volcanic eruptions will occur. This is especially helpful because, since Geyser eruptions are far more frequent than volcanic ones, there is much more of an opportunity to study them and collect data without the dangers as well.

There are several natural phenomena that happen on Earth that happen virtually nowhere else. Are Geysers among these phenomena? Yes and no. There has yet to be evidence of Geysers discovered on other planets so, similarly to plate tectonics, it may be unique to Earth. However, one of Jupiter’s moons, Lo, has eruptions of frozen water particles and other gases through vents in its surface. In addition, Triton (a moon on Neptune) and Enceladus (a moon on Saturn) have cold Geysers called ‘cryovolcanoes.’ Yes, that does sound like a Doctor Doom invention, but we believe it’s far more likely that they occur naturally, erupting from pools of liquid water a short distance from the moon’s surface.

Though Geysers may make our world seem fragile and breakable, they’re actually just a part of nature that’s seemingly unique to the Earth (as of the writing of this article, that is). We may not have everyone convinced of their value, but water you going to do?

NASA Is Making a Plan for Asteroids