The Inspiring Beauty of Victoria Falls

On the border between Zambia and Zimbabwe lies a waterfall. It is part of the Zambezi River and known in the Lozi language as “Mosi-oa Tunya,” or “The Smoke that Thunders.” However, most people simply refer to it as Victoria Falls. And a lot of people do talk about it…being the largest waterfall in the world tends to get people’s attention, after all. 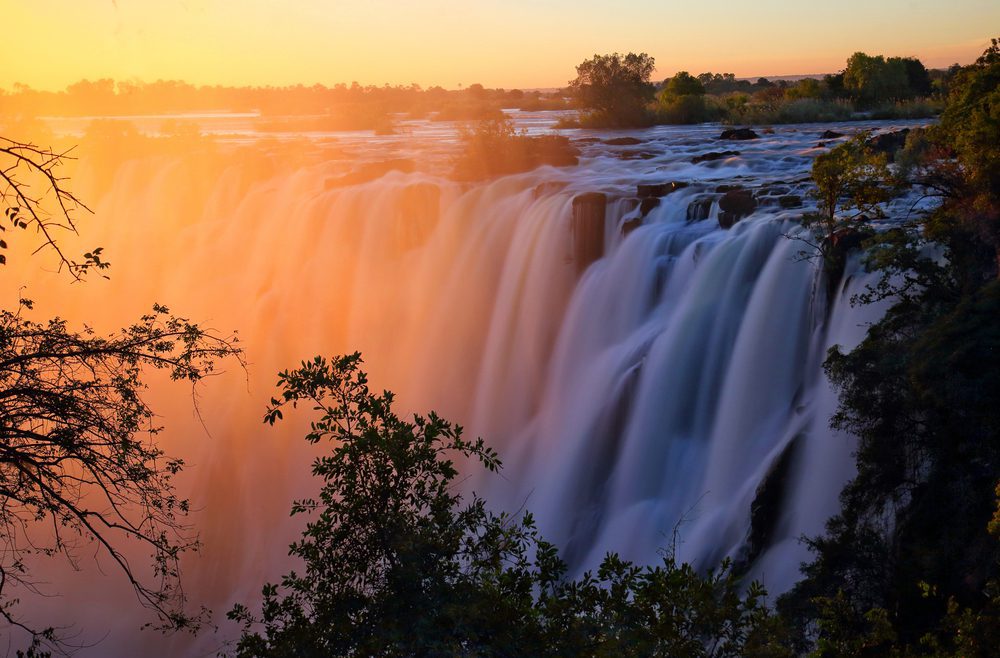 Victoria Falls measures 5,604 feet wide and 354 feet high, making it the largest in size, but not the widest or tallest (Those honors go to Khone Falls in Southeast Asia and Angel Falls in Venezuela, respectively). For comparison’s sake, Niagara Falls only reaches a height of 167 feet, and its widest waterfall, Horseshoe Falls, is only 2,700 feet across. Because of the layout of the land surrounding Victoria Falls and the flow of the waterfall itself, the result is the largest sheet of falling water in the world.

Getting to the Falls

Before reaching the Falls, the Zambezi River flows through a valley on a sheet of basalt. There are several tree-covered islands, which increase in number as you get closer to the cascade. There is a single vertical drop; however, the number of gorges means the number of drops is typically listed at two. When it’s not flood season, the spray from the falls reaches a height of over 1300 feet and will display “moonbows” instead of rainbows during the full moon.

It was first marked on a map by Nicolas de Fer in 1715, but the falls were used by natives as early as the Stone Age. Among these was the Tokalea tribe, who named the falls “Mosi-oa Tunya.” The name Victoria Falls came from Dr. David Livingstone, the first European to see the falls. He named them after Queen Victoria and wrote “no one can imagine the beauty of the view from anything witnessed in England…scenes so lovely must have been gazed upon by angels in their flight.”

Victoria Falls has been the site of many settlements and tourist attractions since its European discovery, which has mostly been welcomed by locals. Both Zimbabwe and Zambia offer day passes to cross the border to see the Falls from both sides, but these vary in price and visa regulations change frequently. Interestingly, the Falls are more popular among locals rather than international tourists, due to the cheap bus and train tickets.

Devil’s Pool and the Boiling Pot

Perhaps the most famous location on the Falls is the “Devil’s Pool,” also known as the “armchair.” Located near Livingstone Island is a rock eddy that fills up to a certain level between September and December. While at this level, swimmers can enjoy a relatively safe spot with minimal current despite the edge of the waterfall being mere feet away. It’s even described as “the ultimate infinity pool” on the Zambia Tourism website. Visitors are allowed to enjoy the pool, but only with the help of a guide. The cascade is just a few feet away, after all- that’s a fall nobody wants to make.

Much like the Devil’s Pool is the “Boiling Pot,” a pool found in the Second Gorge. During low water, the surface is smooth. With high waters, however, comes gigantic swirls and boiling turbulence, hence the name. It’s not uncommon to find objects (or creatures) swirling in or washed up on shore near the Boiling Pot. Unlike the Devil’s Pool, the Boiling Pot is not a tourist attraction. That doesn’t stop thrill-seekers, however, from attempting to visit this part of the falls.

If you’re inspired by Victoria Falls (and who wouldn’t be?) and want to plan a vacation, there are many tourism companies in Zimbabwe offering artist workshops that take small groups into the rainforest, where you will be surrounded by the falls and immersed in inspiration.  Just don’t drop your brush.