Home / Innovation / How Game Controllers Are Made

How Game Controllers Are Made

Have you ever wondered how game controllers are made?

For as long as there have been video games, there have been game controllers. They vary in shape, materials, and button layouts, but each has the same purpose: to, well, control the game. But how are they built? How do they translate a button press into a jump? How do the wireless controllers connect with the device? What goes into designing one that’s comfortable and easy to use?

To understand how a game controller is built, you need to know how they work. Essentially, each button has a piece of metal on the bottom. When the button is pressed down, it meets two conductive strips on the circuit board and completes a circuit. The controller senses the connection and sends data to the CPU of whatever device the controller is paired with. From there, the CPU compares the data of the game or program to respond with the action matched to the button press. This all happens practically instantaneously (it’s called “input lag” when the commands don’t register immediately).

This process explains two universal features on all controllers: a circuit board and a shell of some kind. The shell is traditionally plastic and is molded to make the proper controller shape. It’s worth noting that the mere design of a game controller can take months. Creating a design that is unique but comfortable to be held for long stretches of time is no easy feat. For example, the PlayStation DualShock controller is often considered to be the most ergonomically designed controller ever, with its winged shape and convenient button placement.

Other forms of input include circular plastic sticks with a rubber cover, called joysticks. Joysticks are used for movement and aiming and work wildly different than buttons. Variable resistors called potentiometers are placed at right angles underneath the joysticks. The current is constantly flowing through the potentiometers, but the current depends on the resistance. The resistance is increased or decreased by the joystick tilting (or being pressed down, if the console has that function). The angle is detected by the controller and sent to the console, which translates the direction on-screen. This form of control is known as “analog control.”

Input presses are usually transmitted through a wireless or wired connection. You’ll mostly find wired controllers for older systems like the Nintendo GameCube or Sega Genesis. They work the same way any wired connection would, with the button commands being transmitted through a cable or wire. Wireless controllers use infrared or Bluetooth to transmit data. Alternatively, some systems have controllers built right onto the console. These are mostly handheld systems, like the PlayStation Vita or Nintendo Game Boy. Even a laptop’s keyboard counts as a controller for this reason (especially if you’re playing a PC game).

But what about motion controls? Systems like the Nintendo Wii and the PlayStation Move utilize motion controls in addition to button prompts. These game controllers use accelerometers. Tiny chips keep wafers in place with springs. When the remote is swung around, the springs are pressed by the wafers. The more the controller moves, the more the wafer shifts with it. The accelerometer measures how each wafer is moving in relation to the others and the rest of the controller and the system translates that into a synced movement.

Some controllers also have a rumble feature, which goes off when certain actions are performed. Motors are in the handles or grips of the controllers. These motors hold an unbalanced weight that spins when power is supplied to the motor. The motor will try to wobble to stabilize the weight, but it’s secure in the controller. This translates to a powerful vibration through the controller. 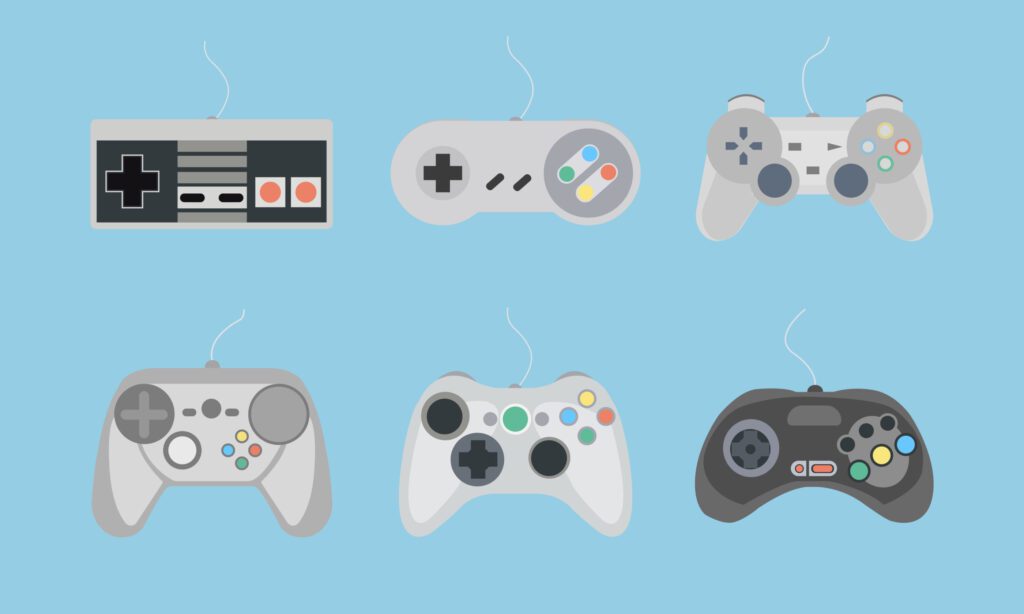 In their own way, game controllers are like smaller, specialized computers. By using circuitry and electricity, they perform dedicated functions that assist the user. And just like computers, some are more powerful or easier to use than others. Some are simple, some are complex, but each one has its purpose: to provide us with hours of fun with our favorite games.

Learn more about the World of Production, and discover how dumbbells, microchips, and the Nintendo Switch are made.