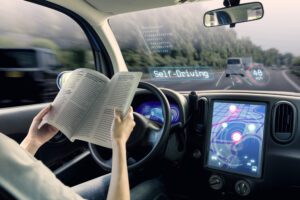 Gridlock, rush hour, traffic jam…it seems like streets are permanently filled with cars. While options like mass transit and carpool lanes help elevate some of the issues, it’s still a problem plaguing cities of all sizes. One company, Daimler, thinks they may have the solution: autonomous cars.

Autonomous, or self-driving, cars are not a new development. Companies like Google, Uber, and Tesla have made major strides in perfecting the tech in the past decade. Daimler is taking a different approach. Instead of slowly advancing development on these vehicles after being teased to the public, Daimler unleashed them in one wave.

In 2014, a street in Magdeburg, Germany was left in a state of construction limbo. It was blocked off from citizens with little information known. On July 3rd, however, the truth was revealed: Daimler was working with Mercedes-Benz to create the world’s first autonomous truck. The road had been paved with the aid of telematics and systems called the “Highway Pilot.” “The result,” Daimler’s website states, “[is] increased safety, lower fuel consumption and also improved working conditions for professional truck drivers.”

The truck, dubbed the Mercedes-Benz Future Truck 2025, isn’t the only work Daimler had done with M-B. They’re also developing the Mercedes-Benz S-Class S 500 INTELLIGENT DRIVE and the F 015 Luxury in Motion. Both are traditional luxury cars with the same “Highway Pilot” tech used in the Future Truck. Without the need for focus on the street, the interior has been given a sizeable upgrade. Of course, Mercedes cars are typically higher-end, but the few photos available show a vehicle nicer than some homes.

It’s worth noting that the “Highway Pilot” doesn’t mean the car is completely automated. While able to handle itself well for long stretches of road, the AI will warn the human driver when approaching city traffic or country roads. It works the most on, most logically, the highway. Daimler calls this level of automation “highly automated.” A fully automated vehicle can run on its own, no driver needed in the vehicle at all. On the other hand, partially automated cars are extremely commonplace. Have lane assist or auto-detect brakes on your newest sedan? Congratulations, you’re part of the self-driving revolution. 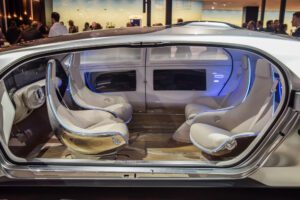 public, there’s no certain answer. Many models come equipped with Intelligent Drive, making them fall under the partially automated category. Features of the system include emergency stop and evasive steering assist, blind spot detection, car-to-X communication, and even remote parking. Testing is still being done with the S-Class, but results are promising. Thomas Weber, member of the Board of Management at Daimler with responsibility for Group Research and Head of Mercedes-Benz Cars Development, said in a statement “with our successful test drives, we have demonstrated that highly automated driving is possible without the luxury of specially closed-off sections of road and relatively straightforward traffic situations.” He stressed that there’s still much improvement to be done, but that they “are the first to drive autonomously through traffic jams.”

Self-driving trucks are much further off but could have revolutionary impacts on the industry. Professional truck drivers are frequently in danger while at work, due to massive blind spots and long hours. Having an autonomous vehicle would give drivers a respite and the ability to rest during long stretches of smooth road. It would also prevent unexpected delays, due to the truck telling dispatchers traffic conditions.

The future of cars isn’t as predicted in The Jetsons. Rather than flying through the air, we have as close to teleportation as is theoretically possible. And Daimler is prepared to make the most of the autonomous future. For now, though, keep both hands on the wheel and your eyes on the road.