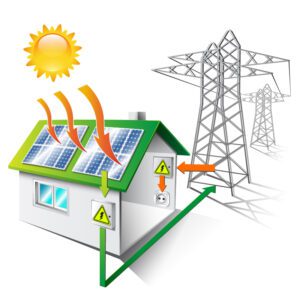 Most people are, at the very least, aware of what a solar panel is. By drawing in the preexisting energy given off by the sun, the panels convert that energy into electricity. But not as many know how that process is completed. It’s surprisingly simple, although some of the terminologies are complex.

A solar panel is actually made of a large number of individual pieces, called photovoltaic cells. Each cell is essentially two layers of semi-conducting material sandwiching metal and other components. Silicon is typically used as the said material. However, silicon alone isn’t enough, so other materials are mixed in, too.

The top layer of silicon receives a negative charge through the inclusion of phosphorus. The bottom pieces of silicon get a dose of boron to create a positive charge. Now, when photons from sunlight hit the solar panel, the electrons from the phosphorus are knocked free and an electrical charge is created. Because of the combination of metal, negative and positive charges, and the photons from the sun, the raw power of sunlight is converted into electricity.

Originally, these cells were made out of glass, but scientists have created ultrathin cells capable of producing the same amount of energy just as effectively. These cells are a minuscule 1.3 microns thick, or 1/100th the width of a single human hair. They’re so light, they can rest on top of a soap bubble without any fear of popping.

There is one problem with solar panels, though: they create DC electricity. In the United States, AC electricity is used to power homes and businesses. This is why inverters are used. An inverter does exactly what it sounds like: it inverts DC power into AC. They also act as a grounder and track statistics like max energy use and voltage. Nowadays micro-inverters are used, which are miniature inverters attached to each photovoltaic cell. This acts as a backup for when a cell fails, so the entire panel isn’t out of commission.

Don’t worry about being without power if the panel does fail, however. In most cases, you’re still connected to the main power grid of your town or city, even when using solar panels. If there’s a particularly cloudy day or you need to plug your phone in at night, you’ll still have access to electricity.

None of this is to say there aren’t drawbacks to solar panels, of course. They’re expensive and need to be installed by a professional. Location is also a major factor. Someone living in a rainy or cloudy city like London or Seattle will find solar panels to be overly expensive mirrors. That’s also assuming you have the ability to make such modifications to your abode.

But while it can be a difficult choice for a smaller, individual scale, on a global scale it’s much more logical. In the space of one hour, enough solar energy hits the Earth to power the entire planet’s electricity usage for a full year (theoretically). A few rows of solar panels placed in key areas (like Death Valley) could solve the energy crisis and still have a surplus of power. 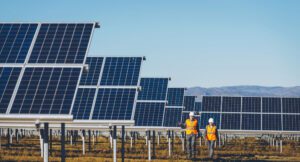 common materials: boron, silicon, phosphorus, and metal. Even if glass cells were to be used, the process would be the same and create just as much electricity. Solar panels are no longer something restricted to the fabulously wealthy and eco-friendly. Solar power is easy to obtain and easy to understand. It’s not a question of “if” it’ll be the power source of the future- it’s a matter of “when.”