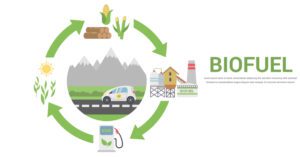 Ethanol. Olive oil. Biodiesel. Manure. None of these items seem to have much in common- but actually, they’re all biofuels.

Biofuels are exactly what they sound like: fuels created from biological compounds and other natural products. While they serve a variety of purposes, the biggest focus is using it for transportation and vehicles. You’ve no doubt seen signs at gas stations advertising ethanol fuel or heard discussions on hybrid cars.

But it’s not all trucks and SUVs. If it’s a natural substance being used to prolong some sort of activity, it counts as a biofuel. If you add a log to a campfire, for example, the wood is classified as a biofuel. Ingesting something with vegetable oil in it counts as well, as the oil is converted into energy by your body. It’s for this reason that “biofuels” is considered such a broad term.

In the realm of vehicles, however, the definition is much more limited. Ethanol is the most common type of biofuel in the United States and is derived from corn. In fact, the process to produce ethanol is much the same as other alcohols. The corn is fermented and broken down, sometimes with the help of enzymes. No waiting three years for a bottle like you would for a nice whiskey here. (As an aside, this technically qualifies liquors like vodka and tequila as biofuels.)

Corn isn’t the only way to make ethanol, either. Brazil is well-known for turning sugarcane into fuel, and soybeans aren’t uncommon bases. Vegetable oil is also occasionally used, mostly to create biodiesel. Biodiesel can be alternatively produced with animal fat. There are plenty of stories 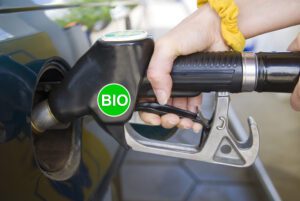 online of people with biofuel-running cars buying the grease from restaurant deep-fryers and using that as a fuel source. This is because the fat has already gone through the transesterification process. It sounds complicated but can actually be done easily at home.

These are all just first-generation biofuels, for the record. They earn this distinction for being technically greener, but still damaging to the environment and disruptive to the food chain if used in great quantities. They’re also the original biofuels, hence the name. Second-generation fuels are more sustainable but aren’t in wide use as they’re still being studied. These include methanol, biohydrogen, and algae-based biofuels.

While second-generation biofuels are great on paper, they still need to be perfected. Algae could be used as the base for any number of fuels, including jet fuel. However, it’s horribly expensive despite providing far more with less (up to 100x more fuel per unit area than other biofuels). Biohydrogen has no impact on the environment whatsoever but designing vehicles capable of using it is difficult. In time, these problems will be addressed and solved.

There’s also the fact that fossil fuels are still in widespread use. Oil and petroleum remain the most common types of fuel in the world, even with resources dwindling. There are opponents to biofuels who even argue that fossil fuels are just ancient biofuels (while technically true, they’re very different in their environmental impact). Fortunately, many providers offer a mixture of traditional gasoline and ethanol, which helps to a degree.

Biofuels aren’t a new topic, but they’re far more complex than people realize. They apply not just to vehicles but to our own bodies. Perhaps that is the key to understanding how to properly utilize them: by acknowledging their mundane presences in our lives. Stranger things have inspired people, after all. And if we take a moment to appreciate and understand what biofuels could do for our future, we might be able to create tomorrow’s future… today.