Lighting the Forge: The Blacksmithing Revival

If there’s one profession that seems destined to remain in medieval times and fantasy worlds, it’s blacksmithing. Most people have no need for a sword or battleax, which makes the practice somewhat obsolete. But blacksmithing has not been lost to time or dismissed as something from Dungeons and Dragons. The job is still around and is actually thriving.

Not necessarily as a full-time job, mind you; it’s gained a lot of traction in recent years as a hobby. Reality TV shows like Forged in Fire and Milwaukee Blacksmith have brought the practice back into the public’s eye and have received positive reviews. Guides to building your own blacksmithing shop are plentiful online. There are even stores open to the public with lessons and workshops, alongside creations for purchase. 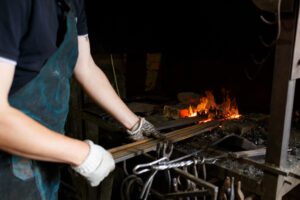 That’s not to say that it’s an easy or minor undertaking. Blacksmithing requires patience, care, and diligence, even as a hobby. And it’s not something that can be learned through college, either. Very few universities offer it as a course, although vocational schools may provide lessons. Instead, the best plan is to find an accomplished blacksmith and become their apprentice. It may seem outdated, but considering the amount of knowledge the craft requires and the longevity of the art, it is apropos.

It’s this labor that makes it so appealing to both practitioners and consumers. Most forms of metalworking are dependent on welding and basic knowledge of the tools. Blacksmithing is defined by the use of a hot forge (the name comes from the black of the oxides developed by the metals used). Other tools are used, however. It’s not uncommon to see a blacksmith’s workshop full of hydraulic presses and power tools.

There are also several types of blacksmiths. Some make industrial 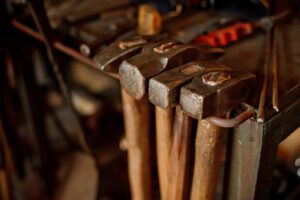 items like grates and security grills. Old-school fire escapes are a good example of their wares. Others create works of art that are showcased in a gallery or put up for sale. While unusual, there are even those that specialize in creating weapons for collectors or re-enactors. They may practice blacksmithing as a profession or as a pastime.

But why the sudden boost in popularity? Part of it is simply the evolving tastes in furniture. Mass-produced products are still popular, but shopping at thrift stores is no longer considered tacky. The newer generations (like millenials) are more keen on getting something special to them rather than something that’s popular. Investing in the work of a blacksmith not only supports a local artisan, but gives the consumer something one-of-a-kind. It’s much like buying a painting or sculpture in that regard- something worth indulging in that won’t be out of style by the end of the month.

There’s also the success of media like The Lord of the Rings and Game of Thrones to take into consideration. Die-hard fans are more than willing to shell out the cash for a recreation of Tyrion’s axe or Bilbo’s sword Stinger. YouTube channel AWE me has even made an entire series based on recreating fictional weapons called Man at Arms. With each episode gaining millions of views, it’s hard to deny the popularity.

The blacksmithing revival is an odd beast. Old-fashioned methods are being adapted to use with modern technology. Current pop culture phenomena has largely agreed with the almost counter-culture wave that blacksmithing rode in on, and both owe their success to the other. But whether you’re merely looking for a new candelabra or wanting to swing a hammer yourself, now is the time. Blacksmithing is no longer a store in video games or an exhibit at renaissance fairs. It is an artform for everyone, and the forge is lit.