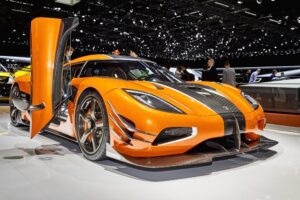 We’ve discussed how people have the need for speed in previous posts. In most situations- internet, travel, food, shipping- the belief “faster is better” holds true. And the fastest of the fast, at least when it comes to cars, is the Koenigsegg One:1.

First introduced in 2014, the One:1 is the world’s first “megacar.” It earns this name for being the first street-legal car with one megawatt of power and an unprecedented 1:1 hp-to-kg curb weight ratio. This means that its top speed is a staggering 273 mph (439 kph).

Only seven One:1 models were ever produced, including one prototype. The production process was highly covert and exclusive, with little known beyond its specifications. However, from this list of features, some information can be gleaned about how this hyper-fast vehicle was brought into the world.

The chassis was made from carbon fiber and weighed 72 kilograms (around 158 pounds). Uprights were constructed from aluminum and there were integrated fuel tanks. The overall layout was based on other F1 cars with a “honeycomb core,” according to the Koenigsegg website.

With such high speeds, powerful brakes are essential. The One:1 came equipped with ventilated ceramic discs and piston calipers- six in the front, four in the rear. There was also optimal traction control with five different handling modes. The wheels were custom from Koenigsegg and part of their “Aircore” line. Michelin produced the tires.

But the real powerhouse was under the hood, naturally. With dry sump lubrication, multipoint fuel injection, and twin turbochargers, the engine was an absolute behemoth. The weight totaled out at 197 kg- a whopping 434 pounds. Of course, this meant that the engine was incredibly noisy, even at slow speeds. With that much horsepower, though, it’s to be expected that the roar would be enormous. 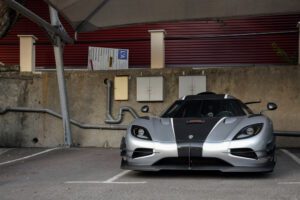 Like any other car on the market, the One:1 had its fair share of additional features. Instead of a sunroof or Sirius XM, however, you could choose from a titanium exhaust outlet and personalized logo on the rear hood. Body striping isn’t too unusual, but how about a clear carbon body? An upgraded audio system always pairs well with one-piece bucket racing seats. And while you wouldn’t have to pay extra for USB connections or climate control, the custom leather luggage set or diamond encrusted key would set you back. At least the racing seatbelts came included.

Unfortunately, the One:1 story ended prematurely on July 18th, 2016. During the Industry Pool testing event in Nürburgring, the car crashed, and the driver had to be taken to the hospital. While the driver was released later that day, the One:1 has yet to appear again since. Instead, the engine was incorporated into Koenigsegg’s newest models: the Agera RS and the Agera Final. In a statement, Koenigsegg said, “We are dismayed with this development but pleased that our safety systems worked as designed to protect our driver.”

For now, the One:1 engine remains an optional feature on Koenigsegg’s new cars, and it seems unlikely that it will be a mainstay once more. But the impact it has had on the industry lingers. It remains the official holder of the fastest car in the Guinness Book of World Records (although the Hennessey Venom F5 has a higher top speed). It remains one of the most-searched-for hypercars on the internet. And, of course, it was featured on Top Gear.

The Koenigsegg One:1 leaves an impressive legacy in its speeding wake. Even as records are (technically un) broken, it still holds the prestigious title of being the first. The one-to-one hp-to-kg ratio has yet to be replicated. And when it is, well, it’ll just continue the trend of humanity wanting to go fast.