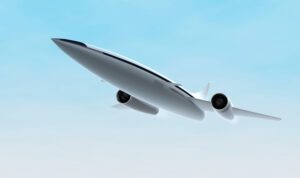 The fastest aircraft in the world clocks in at Mach 6.70. That’s roughly 4473 miles per hour. For reference, the fastest human on Earth (Usain Bolt) has a record speed of 27.73mph. The jet is 161 times faster, give or take a few decimals. It’s no question that we want our planes to be fast…but why do we crave such speed?

Part of it is convivence. While supersonic speeds are commonplace among military jets and specialty aircraft, commercial airliners achieve nowhere near the same top speed. Planes are still faster travel options than trains or boats, but even a trip across the country can take over five hours. The last time a commercial flight broke the sound barrier was in 2003 when the Concorde was retired.

Since then, a number of companies are hoping to make faster air travel a reality. Boom Supersonic hopes to make planes that can go up to 1451 mph by 2023. They’d be able to take passengers to London from New York in a scant three hours and fifteen minutes. Some companies are even dreaming of hypersonic jets, able to fly at five times the speed of sound. They’d be for military purposes first, but eventually could be used commercially.

Boeing also unveiled a new jet plane design earlier this year. During slower segments of the flight, like take-off and landing, it would use a traditional turbine engine. But during the main flight, it would use 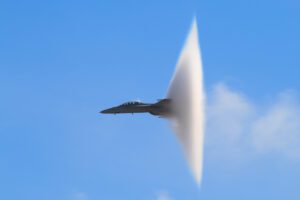 a “dual-mode ramjet” that can only operate at speeds in excess of Mach 3. There’s no word yet on when these planes will be available.

While such speed is exciting, it’s also dangerous. There’s a reason military jet pilots undergo such extensive training and are occasionally known to pass out. The speed and altitude are far removed from normal commercial flight patterns. There’s also debate on what effects emissions at those altitudes will have on the environment. Ticket prices will also go up considerably due to the cost of fuel, and seats already cost a pretty penny.

There’s also the sonic boom to consider. Normal commercial aircraft already create sonic booms, but hypersonic craft could create a boom so powerful, it could cause severe damage. As of this writing, the Federal Aviation Association has banned supersonic flight over land, with the practice only been doing over water.

Scientists, however, are already hard at work overcoming these obstacles. In 2017, NASA’s Quiet Supersonic Transport (QueSST) passed a major milestone during testing and progress continues to be made. The QueSST could reach supersonic speeds without creating a sonic boom, and this technology could be applied to other planes. Other areas of such jets are being studied and revamped. The fuselage, for instance, might not have real windows and instead use virtual ones. These projections would show the same sights as a normal window in real-time, giving passengers the chance to experience seeing the curvature of the Earth from their current height.

When can we expect hypersonic commercial planes? Not anytime this or the next decade, that’s for certain. Even if the technology was perfected, the industry would still need to prepare for the advancements. John Plueger, president and CEO of Air Lease Corporation told CNBC that it’s “hard for [him] to see [hypersonic flight taking off], at least in the next 15-20 years.” He explained the costs would be so high and risky that companies would be afraid to take the gamble.

Nevertheless, the era of international day trips could be closer than anticipated. Until then, though, we can take comfort in watching the Blue Angels and knowing that those speeds are ours in our near-distant future.