The Wonder of the Dragon’s Blood Tree

What does the word “sap” mean to you? Specifically, tree sap. You’re probably picturing something sticky and brown, like maple syrup. Some may also think of balsam or frankincense, which also come from plant resin. But few would picture a tree appearing to leak blood, crimson as any human’s. 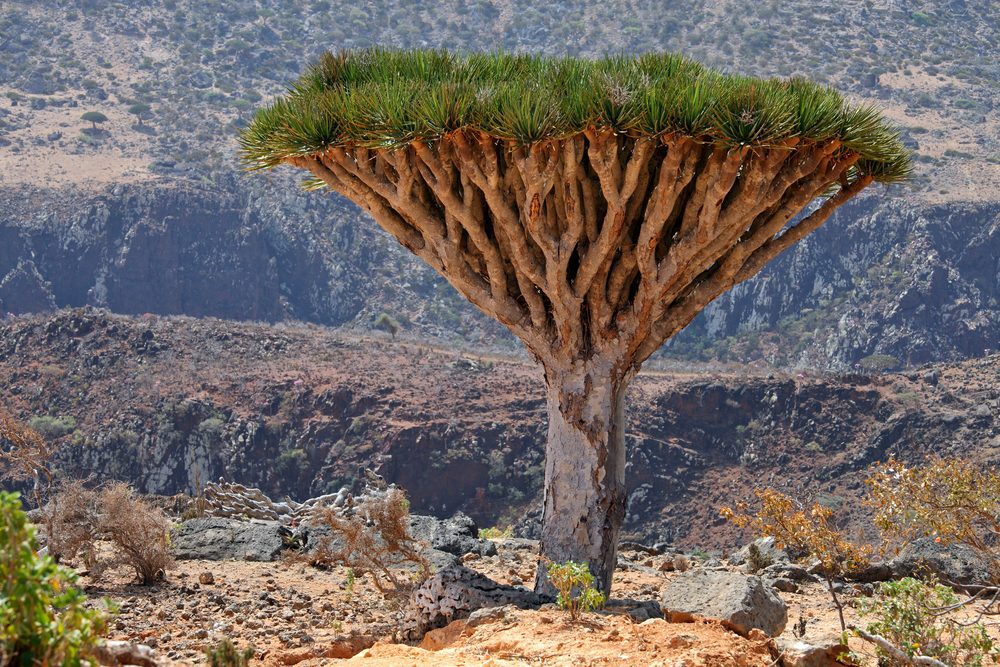 The dracaena cinnabari, or dragon’s blood tree, is a tree native to the Socotra region in Yemen. The nickname comes from the red sap the trees produce. Among Socotris (the native people), it is known as “emzoloh” and has a variety of medical uses. It was also called “cinnabar” during ancient times, which the scientific name is derived from.

While the sap is the most famous aspect of the dragon’s blood tree, it’s not the only standout feature. The trademark umbrella canopy is a result of adapting to monsoon season when rain and mist cover the area. The dense foliage at the top of the tree catches this moisture and leads it down to the roots through thick branches. Given that the tree is considerably ancient, the odd appearance adds to the mysterious nature.

One unique trait of the dragon’s blood tree is how the leaves grow. Only the tips of the branches sport any foliage, both leaves and flowers. Otherwise, the branches are bare, completing the umbrella shape and accenting the otherworldly aesthetic. These flowers are small and greenish-white in color. When fertilized, they produce berries. As they ripen, the berries change from green to black to orange.

Dragon’s blood tree berries are heavily valued, particularly as food for livestock. Even just a few berries improve the health of cows and goats. However, an excess can cause illness, resulting in rationing. Despite this, it plays a major part in the Socotra economy and it is unlikely the people would be able to survive without it.

Many items, from incenses to paints, are made with dragon’s blood resin. The dye is also believed to be the reason Stradivarius violins have such an intense color. There are even some potential medicinal uses for dragon’s blood resin, but this has not been tested in humans. It’s safe to use in small quantities, but the benefits are currently undocumented. Granted, items marked as “dragon’s blood” may also use resin from related trees, such as Dracaena draco or Croton lechleri, among others.

Nature can be beautiful, beneficial, and surreal, often all at once. In an age where trees are often disregarded, the dragon’s blood tree stands out not just for its properties, but its importance as the backbone of Socotrian society. It may feel like an element straight out of a fantasy novel, but it’s amazingly real.

Learn more about the World of Inspiration, and discover the wonder of the Southwest, the world’s largest underwater cave, and the art of Raku Inoue.

How Roller Skates Are Made