Pollution not only hurts our environment, but our bodies as well. Long-term effects include developing asthma, accelerated aging of the lungs, and even shortened lifespan. Is there any way to combat the air? These plants might be the solution. 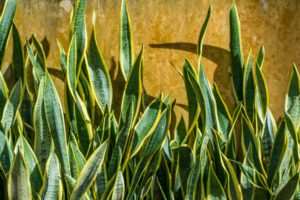 SNAKE PLANT
Snake plants are not only striking (and easy to care for), but remarkable helpers as well. According to a 2014 study in Ecotoxicology and Environmental Safety, the snake plant was the best at removing the VOC (volatile organic compound) toluene from the air. Toluene, for the record, is a leading cause of asthma, so less is best in this scenario.

SPIDER PLANT
In the same study, spider plants proved most effective at removing ethylbenzene. This VOC has been linked to multiple forms of cancer, including lung cancer. They’re also generally good at air purification due to their many, many leaves and vines. And they’re relatively cheap to boot. 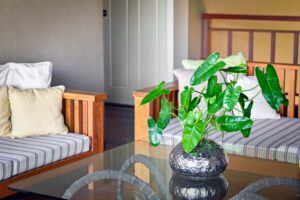 SPADE-LEAF PHILODENDRON
When NASA endorses a plant, you know it’s something special. The National Air and Space Association studied the philodendron in 1986 and concluded it could easily remove massive quantities of formaldehyde, benzene, and carbon monoxide from air supply. Given that there is an average of 430 deaths from carbon monoxide poisoning each year (according to QuickStats.com), owning a philodendron could keep you from joining that statistic.

ALOE VERA
Aloe vera is already a necessity in plant-loving households, given the healing properties the sap can provide. But did you know it’s also an air-cleaning powerhouse? Both formaldehyde and benzene are easily removed by this tiny plant. We suggest keeping one in the kitchen, both for purification and burn-related injuries. 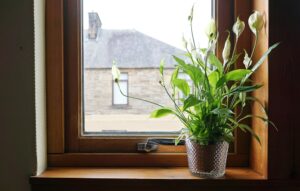 PEACE LILY
There are about 40 distinct species of peace lily, all of which are stunning and promote peace. They’re also fantastic at removing benzene, toluene, and n-hexane from indoor air circulation. N-hexane, for the record, is linked to several health issues and can be found in wood finishes. Plop one down after you finish waxing your floor to keep your lungs clean.

ENGLISH IVY
The king (or queen) of formaldehyde-removal is the humble English ivy, already a popular houseplant. Considering that formaldehyde can be found in everything from glue to plywood to furniture polish, having a pot or two of ivy will keep the bronchitis at bay. (Formaldehyde was linked to causing chronic bronchitis in a 2007 study by the Indian Journal of Occupational and Environmental Medicine.) 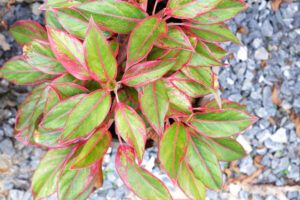 Easy to care for and beautifully pink, the Chinese evergreen is a popular choice when looking for a houseplant to clean the air. Just bear in mind that it contains an irritant toxic to most pets. If you don’t want to risk your dog’s health at the benefit of your own, we suggest trying other options.

GERBERA DAISY
Add a splash of color and breath easy. This variety of daisy excels at removing benzene from the environment and the color can provide a mood lift. Benzene has been linked to leukemia, both in lab studies and studies involving those already diagnosed. You can find gerberas at most gardening shops or even at the grocery store. 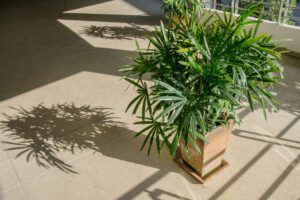 BAMBOO PALM
Save the air and safe for pets! Bamboo palms can remove benzene, formaldehyde, and trichloroethylene with ease thanks to their height. With four to twelve feet at their disposal, the air-purifying benefits are through the roof (pun intended).

We’d also like to give special attention to areca palms, the rubber plant, the dracaena, and the Ficus Alii for their superb air-purifying skills as well. So take a deep breath and rest easy, knowing that these plants will keep your lungs happy.