How to Make a Great Fashion Show

When you think of a fashion show, you picture models strutting down a runway, wearing the latest in haute couture. The spotlights shine on their perfectly made-up faces, pop music blasts from the speakers, and the models may or may not have angel wings (it depends on the company). What you don’t picture are the construction workers assembling the runway, the technicians programming the audio and lighting, and the models fidgeting under the designer’s eyes during fitting.

That was until now.

Maroussia Rebecq, founder of the Andrea Crews fashion line, held what could best be described as a “behind-the-scenes fashion show” in January. While an actual show was held on January 20th at the Lutheran Redemption Church to showcase the label’s fall collection, the days previous were spent preparing for the event in the Le Coeur gallery in Paris. The difference between this show and others like it was that the production itself was a performance entitled “How to Make a Great Fashion Show.”

It’s nothing new for the Andrea Crews label, which started as an art project in 2002, but it is a decidedly unglamorous look into the world of fashion. The fashion world is fairly closed off, with behind-the-scenes photos available to the public usually being taken the day of the show itself. Compare this to Rebecq’s performance, which highlights everything from construction to casting.

Regarding the project, Rebecq said that this year they “wanted to make an event [out of the production process. It’s] a very intense period where we’re building the story of our collection. It will also allow for some distance from what I do. Preparing for a show can be both a highly stressful and beautiful experience, and for me, gathering everyone together in a performance will make it more of a joyful, playful event.”

To some, the entire concept may bring to mind shows like Project Runway or America’s Next Top Model, which do give some insight into the fashion industry. However, reality programs like the above emphasize bizarre challenges and are not the most accurate depictions out there. It’s unlikely that brands like Vera Wang or Armani will be utilizing corn husks or paper bags into their latest lines (although given the ever-changing nature of fashion, it’s not impossible). 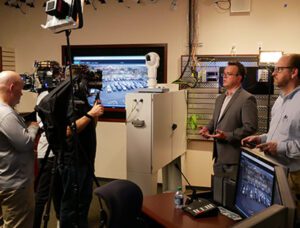 TV shows about the fashion industry also tend to play up interpersonal drama and the hardships such a career path can result in. That’s not to say that it’s an easy job, though, as knowing fashion isn’t the only prerequisite. An extensive knowledge of makeup and document-editing programs like Excel are essential. Working on a fashion show also means being prepared for every possibility, from models quitting moments before showtime, to last-minute outfit changes, to VIPs suddenly appearing and demanding seats to an already packed show. Oh, and strong legs are a plus, even if you aren’t on the runway in heels. There’s a great deal of running around to be had, just like with any sort of production.

This is why the Andrea Crews event was so important to those who want to get started in the fashion industry, novices who are already somewhat experienced, or even those that are just curious about the process. It’s a look into a fantasy world from the view of the servants in the prince’s castle. Rebecq herself said that “How to Make a Great Fashion Show” was a way to showcase the brand’s “way of working, through building all these partnerships… who we are, why are we doing what we do, how and with whom.” And while the process may not be identical for each label, it’s still the first step into making the fashion industry more accessible.
The fashion, however, is still going to cost you.

Get Gardening With Seed Tapes

A Brief History of Pottery

You’re standing on a hilltop and you see layers of pure white filling every hill as far as the eye can see. The flecks blow

Have you ever thought about the way in which art is displayed? There are many mediums through which a piece of art can be experienced

How Life Jackets are Made

A day out on a boat, relaxing and laughing with friends and family, can be a great way to enjoy the summer sun without the

It’s easy to think of history since humans came into the picture. It’s much stranger to think of how some pieces of nature have outlived

Who let the dogs out? Boston Dynamics recently developed a four-legged robot that can be used for a variety of different functions from industrial inspection

Walking through a museum can be an incredibly intimate experience. With each painting or sculpture you see, you get to know the artist. Who they